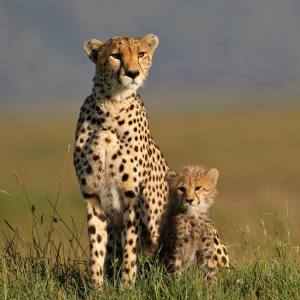 The third edition of TENDUA’s Newsletter announces the Spring we’ve all been waiting for, after a rather long and cold winter. As the days get longer and birds begin to sing at dawn, we can be convinced of the return to the sweetness of summer …

2010 is placed double under the sign of Biodiversity and for the Chinese zodiac, under that of the Tiger. However, reality reminds us that this symbolic animal is seriously threatened in its natural environment - whichever its country of origin.

Things being what they are, our planets’ biodiversity always surprises us: A new feline species has just been photographed in Borneo. Will it be enough to stop man from believing that nature is only there to serve him and that he is in the centre of the world?

A point will also be made on the position of France with regard to the fishing of blue-fin Tuna, who’s future should be decided in Doha during the conference of the CITES mid-March 2010.

We suggest you consider going to Thoiry on April 3rd for a conference on Cheetahs and to Drancy for the second edition of “animal latitudes” between 8th and 13th April, when animal photographers will testify about the state of nature in the wild, then, in Somme Bay for the 20th festival of birdlife and nature from 10th until 18th April of this year.